Ok, so have a look at this very interesting movie about swarms of quadcopters…

So I see the following use case with swarms. Tree robbers enter a store and take valuable goods (e.g. juwels) or money. As soon as the robbers leave the store, the store owner presses an alarm button. The alarm button alarms the police and sprays the robbers with DNA spay.

The alarm button also triggers the automatic release of a swarm of quadcopters directly outside of the store (of course every store has a quadcopter squadron somewhere, e.g. on the roof, or the city police has squadrons stationed in various places in town). One quadcopter detects the three robbers by face and clothes recognition techniques (using video footage from surveillance cameras of the robbed store) in combination with the DNA spray sprayed on the robbers (special sensors on the quadcopters can detect the DNA or other kind of spray).

Once detected, the quadcopter informs the other quadcopters (using mesh technology) and they all start to follow the robbers. The robbers run away, panic (I would do the same if a swarm of these things would follow me…) and take different routes. The swarm splits up in 3 groups (as in the example video above), and start to follow each individual robber as close as possible. While persuing, the quadcopters can bomb the robbers with paint bombs. The following movie gives an example how quadcopters can carry and drop a load…

GPS positions, status (flying or down) and webcam images of the quadcopters are sent in realtime to a police crisis management system (CMS) using 3G of 4G data transfer. The CMS sends the map with positions and the quadcopter images to mobile devices used by the police force on the street. As the police force in the field can see the locations and images of the three robbers on their mobile devices, they can easily follow and intercept the robbers. 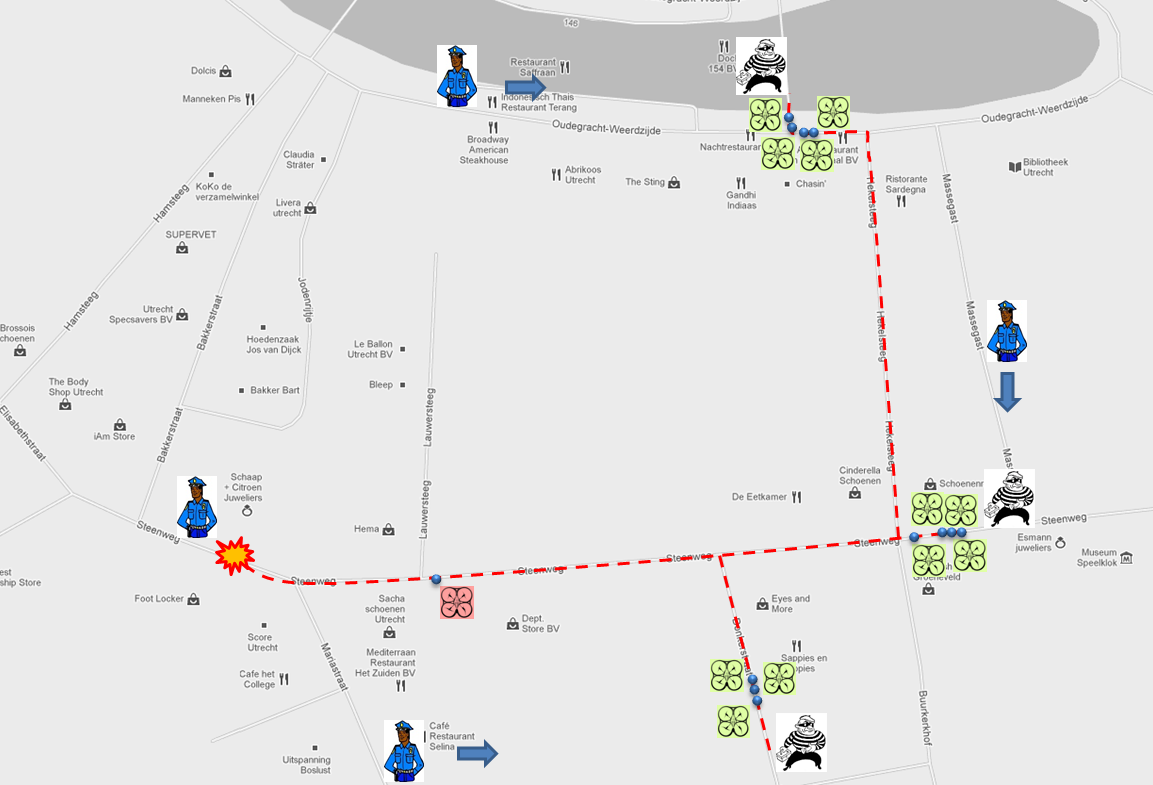 There are many sites where you can buy a Quadcopter (just Google for Quadcopter kit). I found this website that gives nice instructions how to build one yourself, making use of an Arduino board.

Biggest challenges will be course the initial recognition of the robbers in a crowd of people walking in the street, using the video footage of the robbers taken by the surveillance cameras of the robbed store and then keep tracking of them (they may change clothes, which makes it more difficult for the quadcopter to keep recognizing the robbers during the pursuit). The DNA (or other with-sensors-detectable spray) can really help the quadcopter to pinpoint the right person in a crowd of people on the street.

A typical use case like above takes only 5-15 minutes, the quadcopters do not need to be in the air for a long time, which is a good thing as battery life limits the air time. Sending GPS and images to a central system is nog that difficult, as 3G networks are available everywhere.

This entry was posted in News, Use Cases. Bookmark the permalink.